At least five people were injured, two critically, after dozens of vehicles were involved in two chain-reaction crashes on a snow-covered southern Ontario highway in near whiteout conditions Friday afternoon.

A 10-kilometre stretch of Highway 401 between Newtonville and Newcastle re-opened late Friday night after remaining closed for several hours.

At least 60 vehicles were involved in the accident about 80 kilometres east of Toronto, Durham EMS deputy chief Steve McNenly said.

The stretch of tangled bumpers and mangled metal was at least one kilometre long, witnesses said.

Pictures taken after the collisions showed crumpled cars at the back end of a jackknifed transport truck that was blocking three lanes of traffic. One car had plowed into the back of another, lifting its trunk area onto its hood and front windshield. Another car’s door was nearly sheared off while other vehicles had broken bumpers.

Off-duty paramedic Matt Walton was one of the first on the scene.

"There was probably about 10 to 15, maybe a little bit more, tractor trailers involved, cars of varying sizes. Damage to different cars was just outrageous," said Walton.

"It was snowing pretty hard. You couldn't see too far in front of you and as you come up to these cars you see cars completely collapsed at the front, cars that are perpendicular to the traffic piled on top of each other, tractor trailers just completely slammed into each other," he said.

Provincial police said five people were transported to hospital, two with life-threatening injuries. One of the critically-injured was re-routed to Toronto's Sunnybrook Medical Centre.

A dozen ambulances from Durham, Northumberland, Kawartha Lakes, Peterborough and Toronto went to the scene, said Kawartha Lakes EMS deputy chief Derek Brown. Air ambulances could not fly because of the weather.

Provincial police were going car to car checking for people who were injured, said Lazarus.Firefighters say one driver had to be cut from his rig.

Provincial police Const. Linda Wolf said police were looking into the blast of winter weather as a factor in the crashes.

Environment Canada had warned of snow squalls off Lake Ontario in the area.

"The weather is not ideal at this point," Wolf said.

Metrolinx provided a bus at the request of the provincial police to provide shelter for the occupants of vehicles involved in the crash, said spokesperson Vanessa Thomas. 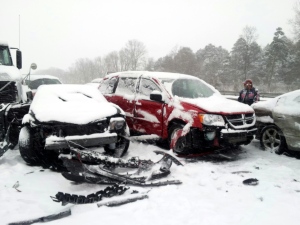