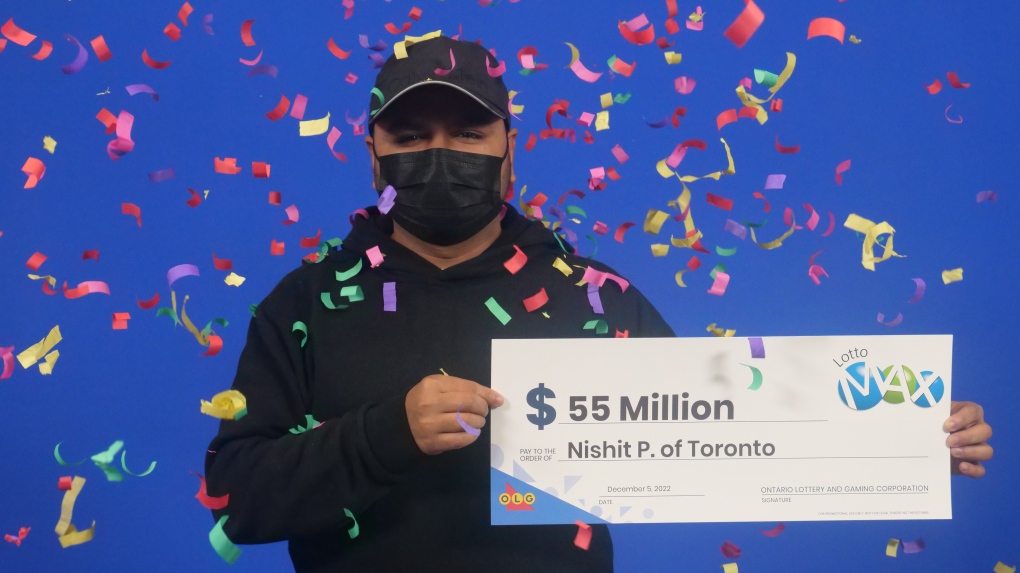 An image of Nishit Parikh with his Lotto Max cheque. (OLG)

A 30-year-old Torontonian is $55 million richer after scoring the Lotto Max jackpot win, and he still cannot believe he won.

“I’m pretty sure I will be checking my bank account a lot to see that amount of money in there. It’s still so unbelievable,” lotto winner Nishit Parikh said in an OLG news release.

While picking up the winning cheque, Parikh told OLG that he usually plays numbers based on significant family dates, but one of the auto-generated numbers sealed the deal for this life-changing prize.

“I purchased this ticket about an hour before the draw closed. The next day I heard on the news that someone in Toronto had won and, of course, hoped it was me,” Parikh said.

Parikh said he couldn’t believe the numbers on the Big Winner screen.

“I was looking at the zeroes, squinting my eyes to do a double take. I think my brain shut down – I was trying to process what was happening,” he said, adding he asked his dad to check the screen too.

“When I scanned it in front of him, he was so excited – he believed it right away. I still wasn’t convinced, so I had him to scan the ticket on his phone in case it was a glitch on my end.”

After seeing that it wasn’t a glitch, the reality sunk in.

“I was overcome with joy. I thought to myself, ‘Now I can finally afford a house in Toronto’,” he laughed, adding that his family is “ecstatic” for him.

As soon as Parikh knew he had won millions of dollars, he said he took the time to seek financial advice on managing that amount of money before claiming the prize.

With the $55 million dollars, Parikh said he can now take care of his family after the “many sacrifices” they made for him to succeed.

“Now I can take care of them the way they deserve,” he said.

But, travelling the world is first on his bucket list, and he has his sights set south of the border.

“I’ve always wanted to see South America and now I can take my time and savour the scenery across the continent,” Parikh said. “I will also make some real estate investments but will take my time to settle into this life-changing win. I want to be smart with this money and live a life that’s as normal and low-key as possible.”

The winning ticket from the Aug. 5 draw was bought at Petro Canada on Markham Road in Scarborough.