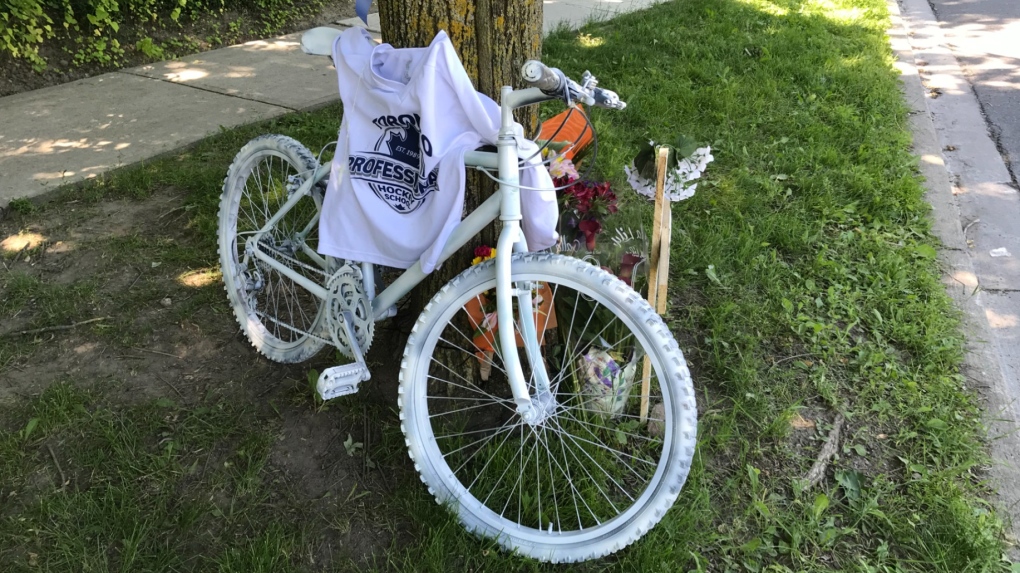 A bicycle painted white is seen at the scene of a deadly hit-and-run crash in Markham, Ont. in June 2020. (CTV News Toronto)

TORONTO -- A 26-year-old woman who fled the scene of a Markham, Ont. crash that left a 54-year-old father of three dead last year has been sentenced to house arrest.

In his decision, Prutschi called the circumstances of this case “a colossal tragedy” and noted that the sentence will “likely attract criticism from all quarters.”

“It will undoubtedly be viewed as too lenient for those who are, entirely understandably, still shattered, broken and angry from the loss of their beloved father, husband, sibling, family member, colleague and friend,” he said.

“It may be viewed as unnecessarily strict or lengthy for those who believe that Ms. Forrestall has already learned enough painful lessons through this court process. While it may not satisfy the interests of a particular party, my focus has been on ensuring it satisfies the interests of justice.”

Just after 8 a.m. on June 15, 2020, Forrestall was heading to her part-time job as a babysitter in Stouffville. The early childhood educator had been previously laid off from the daycare she worked at due to the COVID-19 pandemic.

At the same time, Safet Tairoski was enjoying his morning bike ride near Carlton Road and Old Ivy Lane.

According to an agreed statement of facts, Tairoski was struck from behind by a vehicle being operated by Forrestall.

When officers arrived at the scene, Tairoski was found suffering from life-threatening injuries. He was rushed to hospital where he was later pronounced dead.

The agreed statement of facts said the medical evidence suggests Tairoski was “mortally wounded from the collision and beyond the help of medical assistance almost immediately.”

A friend of Tairoski’s family told CTV News Toronto that he had just purchased a new bike and helmet to get to and from work during the pandemic.

Marc Anthony Lacroix said Tairoski was a father of three who gave everything to his family and friends.

In his decision, Prutschi said Forrestall’s vehicle was badly damaged in the crash.

“She knew she had struck a person and, looking back in a mirror of her car, she thought Mr. Tairoski was dead," he said. “Nevertheless, she did not stop and remain at the scene nor offer any assistance.”

Instead, Prutschi said, the then-25-year-old continued to drive to a Tim Hortons location about 20 minutes away from the scene. From there, she drove to her babysitting job and called her mother, concocting a story that her car had been hit by a truck in the Tim Hortons parking lot.

The judge said she also told this lie to her employer and a collision reporting centre.

“Around 9:30am her mother texted her the news that there had been a hit-and-run accident on Carlton which resulted in a fatality that morning,” Prutschi said. “Ms. Forrestall expressed surprise to her mother that someone could have left the scene of that accident even though she knew that it was she herself who had fled that scene.”

The next day, Forrestall attended an autobody shop to retrieve her car. There, she was met by police and taken into custody in connection with the deadly hit-and-run crash.

In January, Forrestall pleaded guilty to one count of failing to stop at a collision causing death.

“The most serious aggravating circumstance here is the fact that Ms. Forrestall’s decision to leave the scene was made knowing full well that Mr. Tairoski had been grievously injured and possibly killed,” Prutschi said in his decision.

“The unfathomable harm of her actions was poignantly driven home by the long line of friends and family who paid tribute to Mr. Tairoski.”

Seventeen victim impact statements were filed with the court, nearly half of which were courageously read into the record by their authors, the judge noted.

Forrestall has been advised that the College of Early Childhood Educators would be revoking her licence to practice upon her conviction.

Forrestall will spend the first six months of her conditional sentence living under strict house arrest and only be allowed to leave her place of residence once a week for four hours for the purposes of obtaining the necessities of life, completing community service hours or for medical emergencies.

For the following six months, she will live under house arrest with a curfew set between 9 p.m. and 6 a.m.

She is prohibited from having any visitors to her home except immediate family members for the full 12-month period.

Her three-year driving ban will run concurrently with the conditional sentence and two years of probation.

Crown Attorney Brad Juriansz was asking for a custodial sentence of six-eight months in jail followed by two years probation and a three-year driving ban.

Defence lawyer Sean Weinstein said a five-month custodial sentence was appropriate but that it be served in the community under strict conditions followed by two years probation and a one-year driving ban.