Doug Ford, the outspoken former city councilor and older brother of late former Toronto Mayor Rob Ford, has officially been named the new leader of the Ontario PC party but his rival Christine Elliott says there were "serious irregularities" with the voting process that she will insist be investigated.

Ford was named leader after a seven and a half-hour delay as rumours swirled about a vote that was too close to call between him and Elliott.

After a recount, the party declared Ford won on the second ballot as well as the third and final ballot.

Christine Elliott came in second, coming in 153 points behind Ford on the final ballot.

Elliott's camp claimed she won the popular vote plus the majority of the ridings.

They also claim that thousands of PC members were assigned to the wrong ridings. In one case, the Hamilton riding of Mount Hope was assigned to Chatham-Kent, which is located hundreds of kilometres away.

Hours before Elliott released her statement, Ford told reporters he had yet to speak with Elliott after the party made his results official. However, he had nothing but praise for his colleague.

"I think the world of Christine," he said.

"Tonight is a sign there is a lot of work ahead of us," Ford said, alluding to the challenges of the day. "We have a lot more work to do before the next campaign. We have a lot to do in a very short period of time. But I promise you this, we will put a platform forward that speaks to every Ontarian."

Tacking toward the right of the political spectrum with a campaign built first on opposition to former leader Patrick Brown’s carbon tax, Ford at various points promised to repeal or at least significantly curtail the current sex education curriculum in public schools.

He also vowed to boost healthcare spending and end “hallway healthcare” in the province’s hospitals.

"Together we will take Ontario to where it belongs," Ford told reporters and supporters Saturday night. "We will make Ontario the leader of jobs and growth in Canada."

He thanked all three of his competitors in the race, along with his family, the PC members who participated in the vote, and his late brother.

Elliott, who has run for the party’s leadership three times, extolled her significant political experience compared to the rest of the pack.

But despite calling her a close friend, Ford clawed into her during debates, questioning why she took an appointment as the province’s first patient ombudsperson after leaving her post as MPP for Whitby-Oshawa in 2015.

Elliott responded that an independent panel selected her for the job and the suggestion that it was a patronage appointment from Wynne was ridiculous.

She joined Ford in voicing opposition to any kind of carbon pricing. She also pledged to freeze the province's minimum wage at $14 per hour and repeal the Green Energy Act.

On Saturday night, Ford thanked all four candidates, including Tanya Granic Allen who stood behind him as he spoke.

"We all fought hard, every one of us, and I can assure that each of you will fill a critical role in our government."

The Ontario PCs originally planned to announce the result at 3 p.m. but pushed it back to after 10 p.m. after scrutineers from each campaign found that the results were incredibly close.

At one point, a source told CP24 that one of the four candidates had requested a recount of the votes but that the request did not come from the Ford camp.

An analysis by Deloitte as well as the Chief Electoral Officer found that statistically, the results would not change, and that Doug Ford would remain the winner.

A representative of the Mulroney campaign said all four campaigns were scrutinizing the ballots, and each camp brought in their lawyers to examine the process.

Later on in the afternoon, Ford’s daughters told CP24 that they believed their father had won the leadership, but the party refused to comment and his campaign refused to confirm, saying only that there was “nothing official” to report.

More than a thousand party members gathered at the Markham Hilton Hotel and Convention Centre to hear the results Saturday.

Michael Ford, Toronto city councillor and nephew of leadership candidate Doug Ford, said Saturday morning he and scrutineers from the three other campaigns entered a room with as many as 10 paper ballot counting machines.

The digital votes were printed on paper and run through the machines.

A senior party official speaking on background said the digital votes are put on printed ballots to ensure accuracy and to leave a physical record of the result.

The race was prompted by former leader Patrick Brown's resignation on Jan. 25 after two women accused him of sexual misconduct. He has vehemently denied the claims and has vowed to fight to defend his name.

At the start of Saturday’s convention, two heavy hitters in the Canadian conservative movement urged Progressive Conservatives not to turn on one another.

Stressing the importance of a unified party, both former Harper cabinet minister Jason Kenney and interim leader of the Ontario PC Party Vic Fedeli urged members to put squabbles about the leadership vote and the instability caused by Patrick Brown's sudden exit aside so they can beat Kathleen Wynne in June.

"Whoever is chosen, I ask you to support the democratic vote of all of your members," Kenney, who is now Alberta’s official opposition leader, told the packed room Saturday afternoon.

He said that Alberta's current NDP majority government was only possible because conservatives in the province were divided.

"When conservatives are divided, tax-raisers and leftist parties always win," Kenney said, poking fun at Justin Trudeau by saying he would refer to Ontario as the "gender-neutral older sibling" of Confederation rather than its older brother.

Fedeli then took the stage, eager to tell about record-breaking fundraising numbers, and information about followers, saying they now have 21 times more volunteers signed up to participate in the general election campaign than they did in January.

"Every night we raised more money than we did the night before. That's unheard of in the midst of a leadership campaign," Fedeli said.

"I'd be proud to serve under any of you," Fedeli said.

But he urged each camp to get behind the leader once the result is announced later on Saturday afternoon.

"Do not let the let the small differences that are inevitable in a leadership campaign distract us from our shared goal."

No matter who forms government in June, I plan to do what I have always done as Mayor of this city - stand up for Toronto and all of its residents. Please read my full statement on new Ontario PC leader Doug Ford: pic.twitter.com/lFr2amMidH

I’m going to keep fighting so that my children will inherit a better, brighter and stronger Ontario. Together, we can give the next generation of conservatives, of Ontarians, a province where life is more affordable, where businesses can grow and government stays out of the way.

Results are delayed, reason unknown at this time. We are told scrutineers are in a room with candidates #on polo https://t.co/xQ1IB14FWD 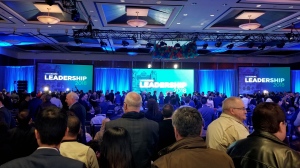 Inside the PC leadership convention 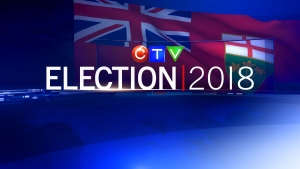