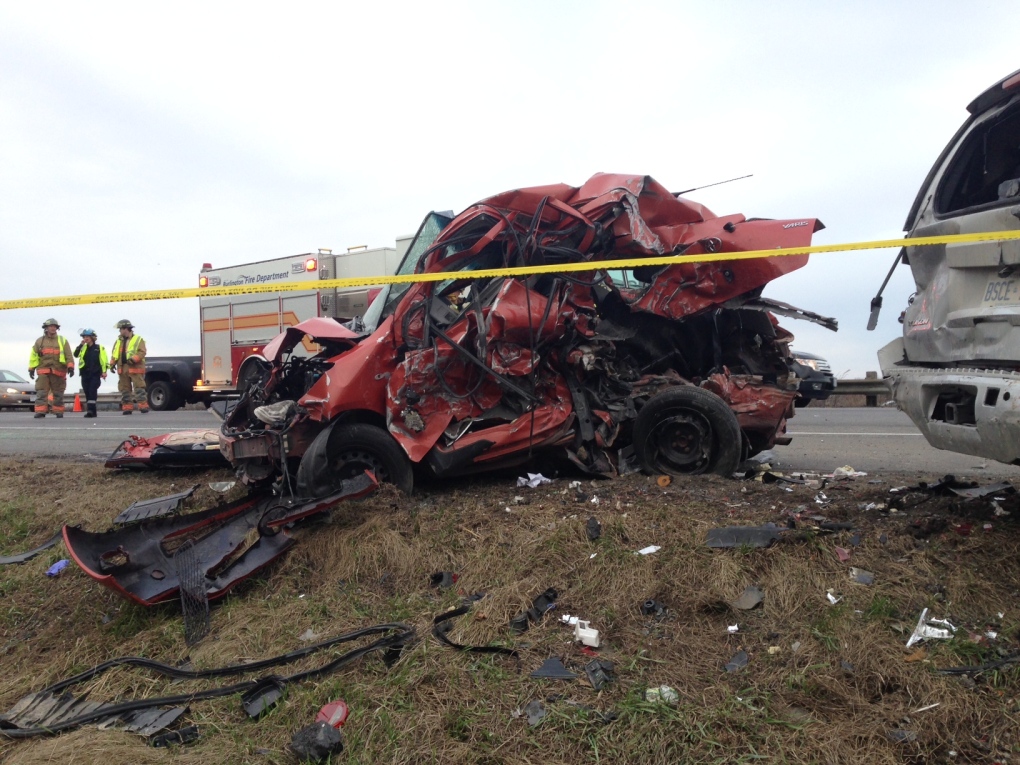 Two people have been transported to hospital with life-threatening injuries after a serious multi-vehicle collision on Highway 403. A section of the highway has been closed as police investigate the crash. (Photo courtesy: Jason Pike)

Two people have been transported to hospital with life-threatening injuries after a serious multi-vehicle collision on Highway 403.

Police say the pileup involved eight vehicles, including an orange Yaris that was severely crushed. It happened at around 6:30 p.m. on the westbound lane of Hwy. 403, just west of Waterdown Road, near Burlington.

OPP Const. Graham Williamson said a police officer prior to the crash was investigating a separate vehicle collision. During the investigation, OPP said an uninvolved black Escalade driving westbound on the highway struck a small white pickup truck. The Escalade then brushed against a police cruiser and continued to drive, causing a series of other crashes.

Williamson said an orange Yaris was severely impacted, and a grey GMC Yukon and two tow trucks at the scene were also hit. The Escalade also drove into a white Jetta, which then struck a grey Chrysler.

The driver of the Escalade, a 44-year-old male from Ancaster, and 59-year-old female occupant of another vehicle were rushed to hospital with life-threatening injuries. Three child passengers from the GMC Yukon were also taken to hospital with minor injuries.

Williamson said the crash is under investigation, and officers are looking into the possibility that a medical episode may have been the cause. Alcohol is not considered as a factor.

Police say no arrests or charges have been made at this point.

All westbound Hwy. 403 lanes near Waterdown Road were temporarily closed.