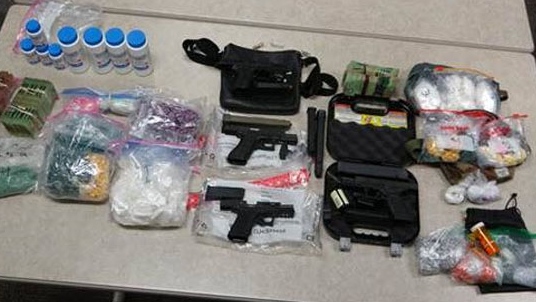 Guns, drugs, and cash were seized by Durham Regional Police over the course of a five-month investigation called Project Econoline. (DRPS)

TORONTO -- Police in Durham Region say they have seized millions of dollars worth of drugs following a five-month investigation into fentanyl traffickers in the area.

In a news release issued Monday, Durham Regional Police said the investigation, dubbed Project Econoline, was spearheaded by the service’s drug enforcement unit and saw the execution of 28 search warrants within the Greater Toronto Area.

Over the course of the investigation, police said they recovered 5.8 kilograms of fentanyl, 4.2 kilograms of cocaine, 205 grams of methamphetamine, 3,000 oxycodone pills, and 30 kilograms of illicit cannabis.

As well, a quantity of hydromorphone, GHB, and MDMA was recovered.

Investigators believe the street value of the drugs recovered amount to roughly $2.5 million.

Eight handguns and more than $300,000 in cash were also seized, police said.

All told, 44 individuals were arrested and 295 charges were laid under the Criminal Code and Controlled Drug and Substance Act.

“Project Econoline has made a significant impact on the availability of fentanyl in areas experiencing high overdose rates,” police said.

According to investigators, there has been a “significant increase” in opioid-related deaths within the Durham Region community.

“These investigations into drug-trafficking and the arrests of those responsible have disrupted multiple smaller trafficking cells and deterred traffickers from dealing drugs within the Region of Durham," police said.