An 18-year-old man is being commended by officials for helping several children escape a burning home in Mississauga Saturday morning.

At around 10:45 a.m., fire crews responded to a two-alarm blaze at a semi-detached house on Starfield Crescent in the area of Winston Churchill Boulevard and Britannia Road.

Adam Attalla told CP24 he first noticed a burning smell before his mom notified him that the neighbour's house was on fire. He recalled seeing two girls on the roof and another girl still trapped inside.

"There was a lot of smoke. So, the two girls came down, and the little girl was still stuck. I told people. Nobody did anything. So, I tried climbing up the wall first. It did not go out well.

"So, a neighbour led me into her house, and I jumped from her roof to the second roof, and I opened the window and got the little girl out," Attalla said.

Incredibly high heat conditions at the structure fire on Starfield Cres - melting visors on FF helmets. An aggressive firefight. 6 children transported to hospital incl. neonate. Amazing bravery of an 18 yr old who climbed up on the roof to help two children escape from 2nd floor pic.twitter.com/TDr2H29dRk

When asked what pushed him to act, the 18-year-old said he could not just stand on the side and watch the girl die.

Attalla said he is not a hero and believes that others would have stepped up and done the same thing.

District Fire Chief Craig Dockery said the house was fully involved, prompting them to go into a defensive attack.

Five children were inside the home at the time of the blaze, and a neighbour helped the kids escape before crews arrived, said Mississauga Fire and Emergency Services Chief Deryn Rizzi.

She said a 15-year-old and an infant were on the main floor and were able to evacuate. The other three children became trapped on the second floor.

Rizzi said two managed to get out onto the roof while a seven-year-old got stuck inside a bedroom.

"An 18-year-old came down the road, went into the neighbour's house. They opened the window on the second floor. The 18-year-old then walked along the roof and helped that seven-year-old get out.

"And then all three of the children walked along the roof and into the neighbour's home. It is absolutely incredible." 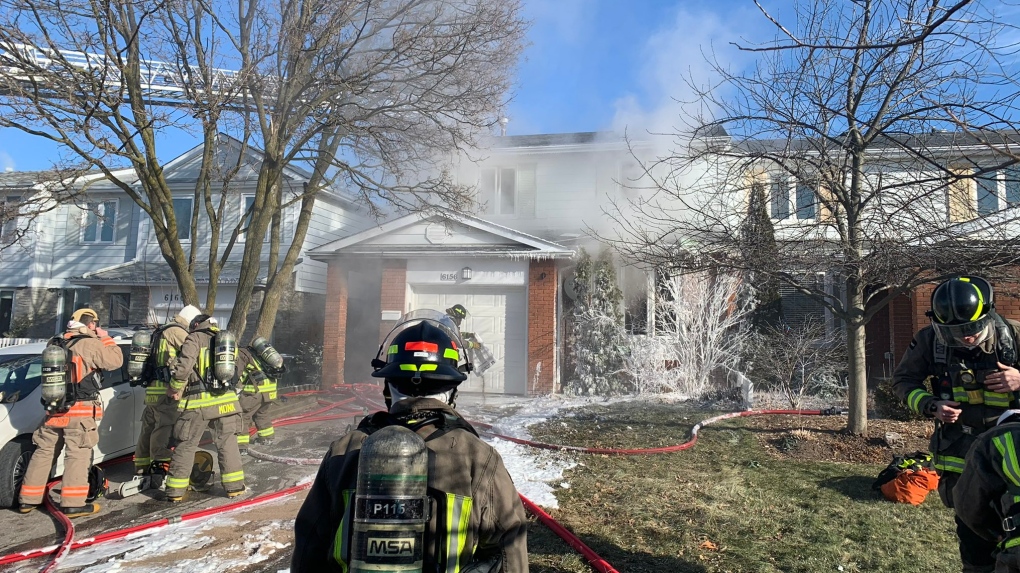 Fire crews responded to a blaze at a semi-detached house on Starfield Crescent in the area of Winston Churchill Boulevard and Britannia Road. (Twitter)

Rizzi said she plans to give Attalla a citation award for his bravery.

"This 18-year-old doesn't have the training but demonstrated the same care and compassion our people do every single day. So, we just want to say what a wonderful job and great things for this person in the future, I'm sure," she said.

According to Peel paramedics, the children's injuries are non-life-threatening.

An officer was taken to hospital for minor injuries, likely for smoke inhalation, Peel police said.

A cat was also inside the home and is now safe and in the care of animal control.

The fire has since been knocked down and did not spread to the neighbouring semi-detached house.

Starfield Road at Windwood Drive is closed for the investigation.