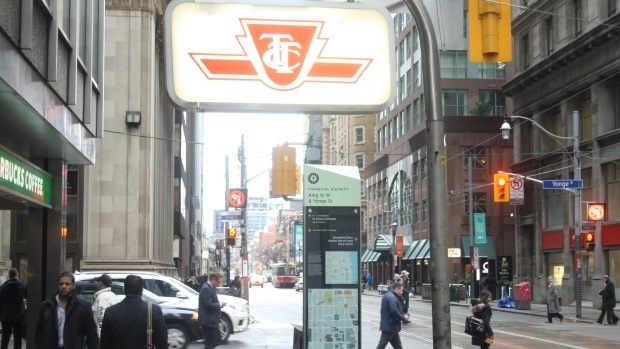 A TTC subway sign is shown in this file photo. (Chris Fox/CP24.com)

Twelve people have now been charged, including 10 current or former TTC workers with fraud in connection with a massive benefits fraud scheme that involved at least $5.1 million in fraudulent claims over several years, Toronto police said Thursday.

Nine former TTC employees and one current employee on medical leave have each been charged with one count of fraud over $5,000.

This is in addition to charges being laid back in 2015 against the owner and two employees of Healthy Fit -- an orthotics business with locations in the Wilson Heights area of Toronto and in Mississauga. They are being accused of participating in a scheme wherein they reportedly convinced TTC employees to submit benefits claims for orthotic devices that they were never actually provided with.

The orthotics business and the employees would split the insurance payments received for the phantom devices and claims for services that were never rendered, police allege.

An anonymous tipster blew the whistle on the scheme in 2014, the TTC says.

Last year, the city’s auditor general reported that as many as 600 TTC workers may have been involved in the fraud at some point or another.

A similar scam involving other City of Toronto employees resulted in $96,000 in fraudulent claims paid out by Manulife, the benefits provider involved in both instances, police said Thursday.

The TTC says that including those charged criminally, 150 workers have been fired, forced into retirement or resigned in order to avoid dismissal in relation to the fraud investigation. More dismissals are expected.

The Commission also changed its benefits provider from Manulife to Green Shield in 2017 after holding a public bidding process.