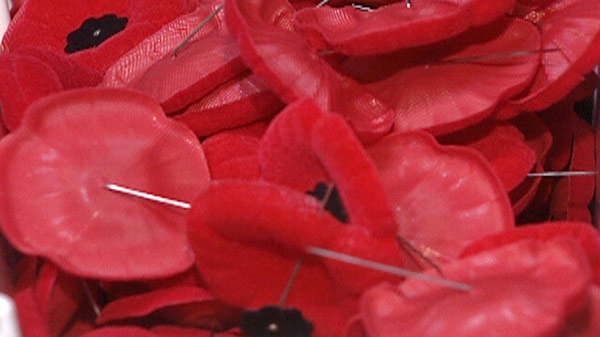 Poppies are seen in a Royal Canadian Legion poppy box.

LONDON, Ont. - Members of a veterans' group in London, Ont., say they're stunned after someone stole 10 poppy donation boxes from the group's office.

Officials say the suspect or suspects broke through a window at the Canadian Corps Association on Dundas Street last Sunday night and stole the boxes.

It's not clear how much money was lost.

Veterans Affairs Minister Steven Blaney says in an email that he's appalled by the thefts in London.

"The money raised during the campaign helps ensure our veterans have the additional care and support they need," Blaney said.

"It is our duty as Canadians to show respect and honour the sacrifices of those who served and those who continue to serve our country."

Group spokeswoman Sherry Cornish says police could not get fingerprints because the suspect or suspects wore gloves.

"I was in shock to think that someone could do this to our veterans," Cornish said of the London thefts.

"To me this is really disgusting."

There has been a rash of poppy box thefts in Ontario but the others were from public places like restaurants and convenience stores. At least six people face charges in those cases.

Police in Windsor say Thomas Lee Lesperance, 33, of no fixed address, surrendered Wednesday night in the theft of a poppy box recorded on surveillance video. He's charged with theft and possession of stolen property.