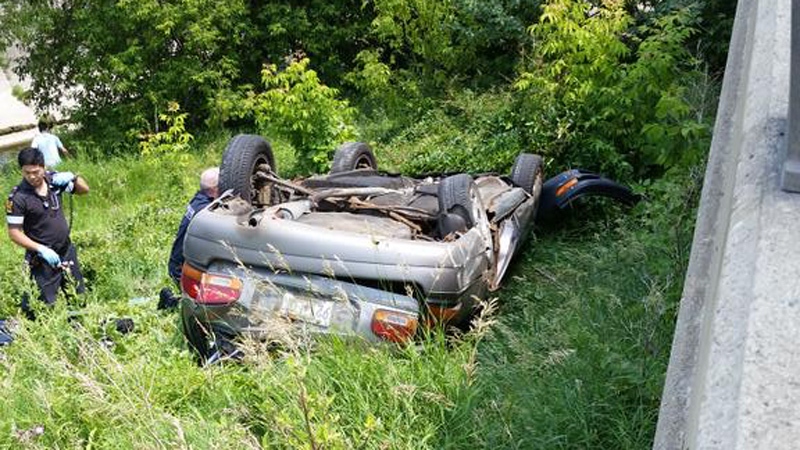 Emergency crews were called to the scene of the accident at approximately 1:30 p.m. on Saturday, after a car left the road and landed on its roof in the creek below. (Frank Graziano/Twitter)

One person has died and three others were seriously injured after a car rolled over a guard rail on Black Creek Drive near Lawrence Avenue West, paramedics say.

Emergency crews were called to the scene of the collision shortly before 1:30 p.m. on Saturday after two northbound vehicles collided, causing one of them to go over the guard rail and plummet approximately three to four metres to land on its roof in the creek below.

According to a witness, the vehicle that jumped the guard rail was attempting to change lanes when it hit the other car.

"(The driver) quickly made a sharp turn to the right, clipped the Mercedes (and) rolled over top of the rail," Frank Graziano told CTV Toronto on Saturday.

Four passengers, including the 68-year-old male driver, were trapped in the car and had to be freed by emergency responders.

It took them nearly 30 minutes to extricate the victims from the vehicle.

Emergency responders say a 55-year-old male from the Toronto area was later pronounced dead and three others were rushed to hospital with life-threatening injuries. Police say their condition has since been upgraded to non-life threatening.

Police say no one in the other vehicles was injured.

The northbound lanes of Black Creek Drive were temporarily shut down as police investigated the crash.

"The dynamics of the collision are under investigation," Const. Graham Williamson told reporters at the scene. "Everything is being investigated at this point."

With a report from CTV Toronto's Heather Wright