1,400 people to gather for secret dinner in Toronto 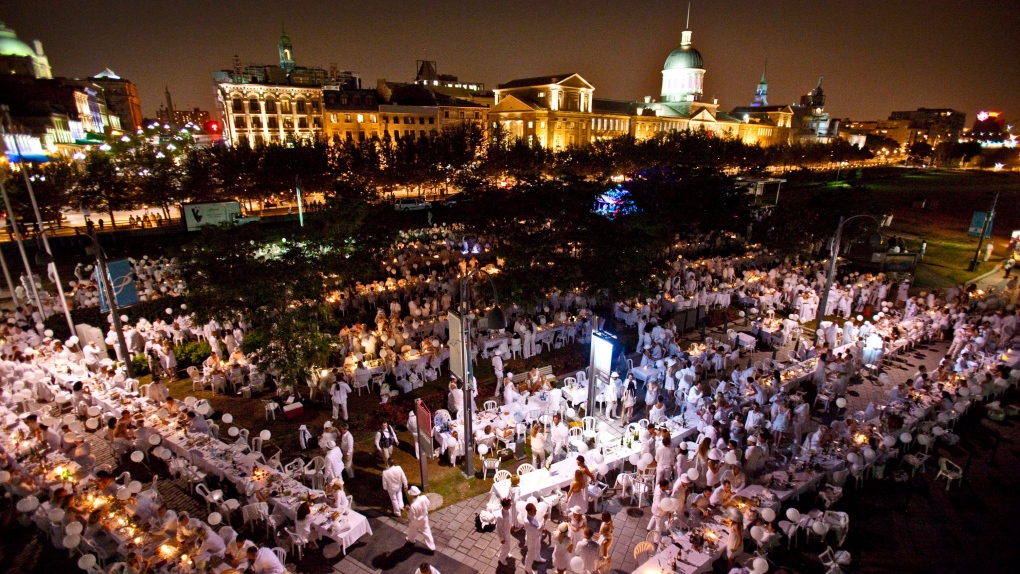 People take part in a Diner en Blanc event in Montreal in a 2009 handout photo. THE CANADIAN PRESS/HO-Sean Mollitt

More than 1,000 diners, all dressed in white, will descend on a secret downtown location in Toronto Thursday evening where they will set up tables, unpack three-course meals from picnic baskets and raise their glasses to toast fine food, good friends and elegance.

The scene may be enough to cause passerbys to pinch themselves, but it’s not a dream.

The ethereal diners are part of a worldwide event called Diner en Blanc, or Dinner in White, which will make its way to Toronto for the first time next week.

“We’re all busy with our lives and this is saying, let’s take a break. Let’s do something special. Let’s experience something together,” says Toronto event co-organizer Jessica Tan.

The pop-up dinner is inspired by an event started in Paris by Francois Pasquier and a group of his friends 24 years ago.

Today, the Parisian Diner en Blanc draws crowds of up to 15,000 people and similar dinners have been held in countries including Italy, Puerto Rico, Australia and the United States.

Diner en Blanc made its way to Canada with a dinner in Montreal four years ago. More recently, Quebec City, and now Vancouver and Toronto, have joined the celebration.

Tan, who is one of three main organizers of the Toronto dinner, was inspired after attending Diner en Blanc in Montreal last year.

“I get goose bumps every time I think about it,” Tan says, recalling her experience, which included 3,300 people dining together in the Place du Canada.

She describes the Montreal event in glowing terms, a night when different generations came together, met new friends and used a downtown space in an elegant new way.

For the Toronto event, participants sign up online and pay a fee of between $25 and $33, which goes to cover things like rentals, transportation, licences and incidental costs.

Participants choose from a list of meeting spots and are led to the secret location by a table leader.

The journey is part of the fun, Tan says, recalling her Montreal experience.

“On the way there, three strangers said, ‘Oh congratulations,’ they thought we had just gotten married,” Tan said. “We could see people all in white, so we knew we were heading in the right direction.”

Once diners arrive at the secret location they spread out fine china, table linens -- white, of course -- and begin the feast. Wine is also available for purchase to ensure all liquor laws are followed.

Toronto’s event is limited to just 1,400 people, with plans to go bigger after the inaugural year.

The event is already full, but there is a waiting list if extra spots become available.

Caledon resident Monique Van De Merwe was one of those lucky enough to get a guaranteed spot, along with a group of nine friends from Caledon and Toronto.

Van De Merwe, who describes herself as someone who likes “good food, good wine, good company and good ambiance,” was drawn to the mystery of the event and the opportunity to do something totally new and unusual.

Though there is temptation to do so, she isn’t trying to guess the location.

“Part of me wants to try to guess. A couple of people in the group have tried and I’m, quite frankly, not interested in knowing,” Van De Merwe says. “I think that’s part of the interesting component of the event, is that there is an element of surprise.”

When the surprise is over, when bellies are full and new friends are made, diners will stand together and light sparklers, 1,300 white lights against an all-white background.

And when it’s over, they’ll pick up and float away, says organizer Tan.

“We show up. We have our lovely evening together. And we disappear like we were never there.”